Emergency Uniforms on the Yser Front The ornate uniforms that were described in the previous section did not last long after the first shots were fired in August of 1914. In fact, the appearance of the Belgian forces began to change in the immediate aftermath of the fighting at Liége, Haelen, and Namur. The shakos, chapskas, and other headwear left over from the previous century were all quickly lost or abandoned in favor of the simple field caps. The summer heat, the pace of the Belgian withdrawal – first from the Meuse to Antwerp, and then from Antwerp to the Yser - and the nearly constant engagement with German forces from early of August to the middle of October all contributed to a deterioration in the appearance of the Belgian forces. 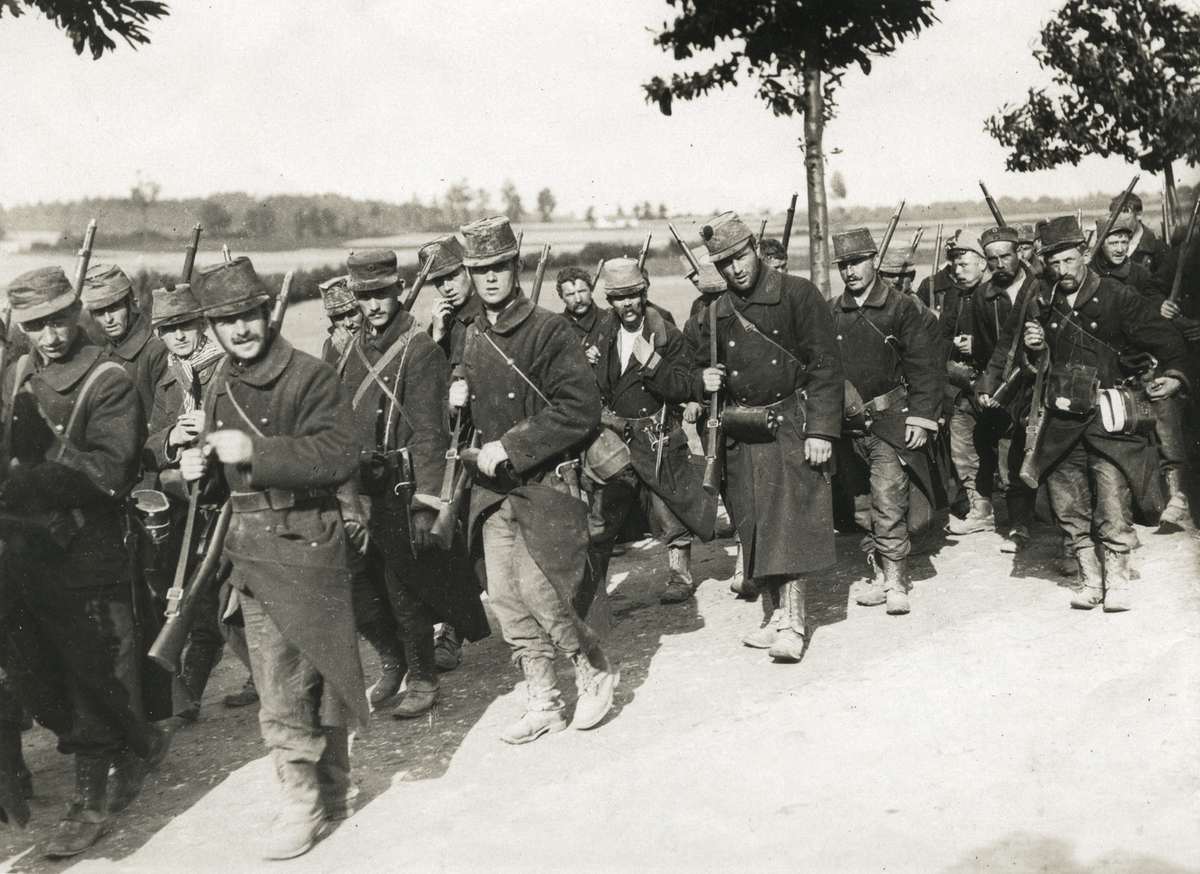 The photo below was taken during the retreat from the Meuse line. Morale remained high, even after Liége and Namur were abandoned, and the Belgian forces conducted their retreat in good order. The same cannot be said of their uniforms and equipment, which was already showing their limitations beyond the cantonment and parade ground. Some of the items were simply not designed for the modern military campaign. Shakos, knapsacks, accoutrements, and even the occasional overcoat or rifle would have been strewn along the roads of retreat.

Their appearance notwithstanding, the Belgians performed admirably in the field, fighting delaying actions that gave British and French forces time to better respond to the German sweep through Belgium. Most importantly, the Belgian Army was kept intact, and though comparatively small, it would come to hold the important northern end of the Allied line for the duration of the war.

The Belgian Army reached the Yser on 15 October. The first German attack in what became the Battle of the Yser was launched the very next day. From then until the middle of November, the Belgians were engaged along the river and at Ypres. Even if there had been the opportunity to thoroughly reorganize and refit the army, all but the most essential matériel of war was in very short supply. There had been a concerted attempt to bring the stores from Antwerp along with the Army as it moved toward the Yser, but much of the clothing, equipment and other goods was inevitably left behind or abandoned en route. The stores that did make it from Antwerp to the Yser front were limited, and these were exclusively reserved for the field army. So it is likely that segments of the regular field army were able to maintain a semblance of their former appearance while the stores from Antwerp lasted. Fortress artillery and gendarme units, as well as any newly formed units, had to rely solely on emergency uniforms and equipment. Many new recruits may have worn their civilian clothes. By the end of October then, the typical Jas was wearing a mismatched and likely tattered uniform. Additionally, while their Mauser rifles had served them well, many had been rendered unserviceable and others lost or abandoned. The rapid fire Krupp guns had also more than proven their worth, but these too had been overworked, and almost half of the remaining guns were in need of repair. The already limited number of machine guns in the Belgian ranks had been reduced by about half as well. The Army was in desperate need of resupply, but with German forces occupying nearly all of their country, they were also in need of new bases for supply.

In the short term, all captured German stores were sent to the Yser for Belgian use (captured stores of the similar M1890 Turkish Mauser would later be sent to the Belgians as well), but a more consistent source of supply would be needed. Quite remarkably, despite facing its own shortages upon mass mobilization, France promised to provide its new ally with whatever extra matériel they could spare. The first shipment of French supplies arrived in November. Items ranged from hastily produced trousers and coats to surplus military tents, blankets, and canteens. Also in desperate need were all sorts of knit and under garments, from drawers and shirts to socks, scarves, and mittens. In order to maintain the Belgian Army’s effectiveness, the French also began sending field guns, machine guns, and ammunition for both. Initially, attempts were made to convert ammunition for the French Mle1897 75mm cannon so it could be used in the Belgian Krupp guns, but the rounds proved to be too powerful. Eventually, the French took it upon themselves to reequip the entire artillery branch of the Belgian Army. It was also during this time that the M1874 Fusil Gras and M1886/93 Lebel found their way into Belgian ranks. Nearly 150,000 Gras rifles were converted to use the abundant supply of 8mm Lebel ammunition.