The artillery uniform was dark blue with scarlet facings. The dress tunic resembled that of the grenadier, single-breasted with a short skirt and red epaulets. Instead of the greatcoat and shako, horse and field artillerymen wore dark blue cloaks similar to those worn by the cavalry, and wore busby or Talpack hats while on service. The cavalry field cap, made from dark blue wool and featuring a red stripe, was worn by field and mounted artillerymen. Like the infantry jacket, the artillery field jacket was single breasted with one row of six brass buttons, but it featured two front pockets with brass buttons as well as buttoned shoulder straps. Either the crossed-cannons insignia or a regimental number was featured on the jacket or tunic straps, or, in the case of the fortress artillery, letters signifying the fort at which the unit was garrisoned ( ‘A’ for Antwerp, ‘L’ for Liége, and ‘N’ for Namur). Fortress artillerymen wore the infantry-patterned greatcoat and shako, but with the letter of their garrison on the collars rather than a regimental number. The trousers were supposed to be the same for all branches of artillery, made of dark grey wool with a broad red stripe down the sides. However, the fortress artillery could receive trousers of other colors. Members of the dismounted artillery units were supposed to wear the M1896 equipment discussed in the infantry section, while members of the mounted artillery wore equipment sets similar to the cavalry. In both cases, and in order to use up remaining old stock, artillerymen could be issued an older version of the ammunition pouch from the 1870s. The artillerymen’s belt was often a pouch belt buckled with a brass buckle that was stamped with the grenade or bomb symbol. The field and horse artillerymen were issued the Mauser M1899 Carbine. Fortress units were to be issued with the same, but some still carried the antiquated Albini breech-loading rifle.

Engineer (pionniers or genie) uniforms were similar to the others apart from its collar and facings, which were black with red insignia and lettering. Their greatcoats were of the infantry pattern, but with collars featuring the engineer's badge, or numbers 1-5 if part of the 5 special engineer companies. Initially their trousers had been dark blue, with a broad red stripe along the side seam, but by 1914 many were issued with the blue-grey trousers worn by the infantry. Engineer shakos were also similar to the infantry (apart from the insignia), as were their equipment and arms. By 1914 the Engineer field cap was a floppy kepi-styled hat. This cap would later be the basis for the short-lived 'Yser Cap' that was issued to all branches in the winter of 1914-1915. It seems that Engineers could be issued either the rifle or carbine version of the Mauser M1889.

The regional units of the Garde wore either dark blue or dark green uniforms, generally similar in pattern to older versions of the active military. Infantry units wore a wide-brimmed hat, artillery a shako, and cavalry a fur busby. Members of the Garde might also appear in civilian clothes in times of emergency. Their accoutrements were generally of similar or older patters as the active military, but their armaments tended to be older models, such as the 1867 Albini, 1870 Comblain, or 1874 Fusil Gras. 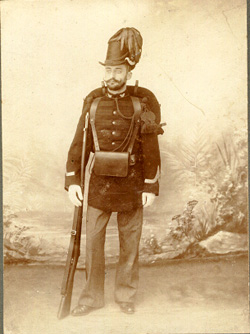